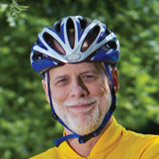 Twelve years ago, Gary Arvan received a liver transplant. Primary sclerosing cholangitis, a disease of the bile ducts had destroyed his liver and threatened to take his life. The transplant was complicated. During his surgery Gary needed 23 units of blood.

But Gary came through with flying colors. Before long he was once again his former, animated, vibrant and athletic self. In fact, only one year after his transplant Gary successfully completed the annual 200-mile Seattle-to-Portland bike ride.

Gary also made good on a promise he had made: to raise his two boys to manhood. In 2015, Gary watched proudly as his older son, Dan, graduated from Washington State University, with younger son Steven following his brother’s college journey. “Seeing Dan graduate was one of the best moments of my life. I’m so grateful for everyone—my doctors, family, friends, blood donors—who made it possible for me to be there.”

In July 2015, Gary, wife Poppy, and team of friends, repeated the STP bike ride. It celebrated the 10th anniversary of his transplant and a decade of life well-lived.