Seattle Rep and Seattle Opera Host Summer Pop-Up Donor Centers
News Release – July 28, 2020
As summer historically signals a dip in the blood supply, two Seattle arts venues are lending a hand to support the community. In partnership with Bloodworks Northwest, the Seattle Rep and Seattle Opera will each host a Pop-Up Donor Center in August. Both organizations join the growing list of venues utilizing their community spaces to provide a lifeline for local patients

EFESTĒ Winery Hosts First Pop-Up Donor Center In Woodinville Wine Country
News Release – July 10, 2020
EFESTĒ Winery and Bloodworks Northwest are partnering to support local hospitals and patients through a unique blood donation opportunity on the Eastside. On July 21, 23, 27, 28, 30 the Woodinville tasting room transforms into an exclusive Pop-Up blood drive experience in an effort to rally local residents and wine enthusiasts to save lives.

Donors Needed To Stock The Shelves For Local Patients Amid Blood Shortage
News Release – June 29, 2020
Bloodworks Northwest is bracing for a severe summer blood shortage that could limit local trauma centers access to blood, so they’re ramping up their appeal for blood donations of all blood types. Anyone who donates between June 29 – July 11 gets a $20 grocery gift card for stocking the shelves for local patients.

Seattle Seahawks & Seafair Team Up with Bloodworks to Support Summer Needs
News Release – June 25, 2020
When speaking of Seattle, it is hard not to mention the Seattle Seahawks and Seafair. One a championship football team and the other a long-standing annual celebration of the city, both are beloved by the people. This summer, each iconic organization will partner with Bloodworks Northwest and commit to the health and wellbeing of the residents in their community.

University of Oregon and Bloodworks Partner to Bolster Blood Supply
News Release – May 29, 2020
The University of Oregon is stepping up to fill the growing needs by hosting a Pop-Up Donor Center providing a safe location for area blood donors to give critical donations.

Hospitals to Resume Elective Surgeries, Triggering Surge In Blood Needs
News Release – May 6, 2020
Washington and Oregon hospitals are preparing to re-start surgeries, organ transplants and cancer treatments. Patient needs and requests for blood from Bloodworks’ healthcare partners are rising quickly, and could reach pre-COVID levels as early as next week before the blood supply is ready.

Seattle Sports Teams Unite with Bloodworks
News Release – April 23, 2020
Last week, Bloodworks and the Seattle Mariners announced a new partnership to host a 7-week long Pop-Up blood drive experience at T-Mobile Park to address the ongoing need for a stable blood supply amid the COVID-19 pandemic. Following suit, the Seattle Seahawks, Seattle Sounders FC, and Seattle Storm have all stepped up to the plate to provide extra assistance. Each of the teams have committed to hosting their own additional blood drive at T-Mobile Park.

Bloodworks and Seattle Mariners Team Up to Save Lives
News Release – April 10, 2020
Bloodworks Northwest and the Seattle Mariners announce a special three week Pop-Up Blood Drive experience at T-Mobile Park from Monday, April 13 to Sunday, May 2, 2020 to ensure blood needs are being met amid COVID-19 pandemic

Bloodworks Joins Partners in forefront of COVID-19 Treatment Study
News Release – April 7, 2020
Bloodworks announced today that it has partnered with leading agencies in a study at the forefront of identifying effective treatment for patients severely ill with the new virus by collecting plasma donations from recovered COVID-19 patients.

Blood Supply Stabilized; Community Action Critical to Make It Resilient
New Release – March 23, 2020
As the massive impact of the COVID-19 pandemic on local communities becomes apparent, Bloodworks Northwest thanks donors for their extraordinary response over the past three weeks to make up for a giant 11,500 donation shortfall after hundreds of cancelled drives since March 1.
Bloodworks asks donors to commit to their April appointments now to keep the shelves stocked for the transfusion needs that are coming.

High School and College Closures Wipe Out 25% of Local Blood Donations
News Release- March 16, 2020
Approximately 60% of the blood supply is collected at mobile drives, of which schools make up 25%. As high school, college, business, and event closures unfold across the Pacific Northwest, school closures add new stress to a community blood supply already in peril from ever-diminishing opportunities for the public to donate. First-time and repeat donors urged to help others in the pandemic.

Blood Supply Hits Emergency Level Due to Coronavirus Concerns
News Release – March 9, 2020
The accelerating number of blood drive cancellations due to the closure of schools, businesses, and events over coronavirus concerns has put nearly 60% of the community’s blood supply in jeopardy. For the safety and care of current and future patients, Bloodworks is urging the community to step up to donate and spread word of the current need.

Bloodworks Northwest Reassures Community It’s Safe to Donate Blood
News Release – March 2, 2020
Recognizing that donors may have questions and concerns in light of the state of emergency declared in Washington State following the death of a patient infected with the COVID-19 (2019-novel coronavirus), Bloodworks Northwest reassures the community that it’s safe to donate blood, and donations are continuously needed.

Local Car Dealer and Bloodworks Northwest Team Up To Address Urgent Winter Blood Shortages
News Release – January 15, 2020
Haselwood Auto Group, and its dealerships are sponsoring a chance for one lucky blood donor to win an incredible new car when they donate blood with Bloodworks. And not just any car – the winner will have their choice of car among nine (9) pre-selected new vehicles in the Haselwood Auto Group inventory.

Snowmageddon: Snowstorm Dents Local Blood Supply
News Release – February 6, 2019
The snowstorm and icy roads that closed schools and many businesses on Monday also put a major dent in the local blood supply, according to Bloodworks Northwest.
At emergency level—less than a one‐day supply—donors are urged to make an appointment as soon as possible before the second winter storm hits. 1,500 collections lost in last 3 days due to cancelled drives and appointments.

Thanksgiving: A Perfect Time to Share the Gift of Life
News Release – November 15, 2018
Bloodworks Northwest is bracing for a big dip in holiday donations and asking people to give blood during the next 10 days. Starting November 22 and extending until New Year’s 2019, Bloodworks is increasing hours at its donor centers to encourage donations. Most centers will be open on Thanksgiving Day with cozy offerings for donors.

Hurricane Season 2018 Looms–Northwest Donors Urged to Help
News Release – July 19, 2018
With the hurricane season here, experts at Seattle-based Bloodworks Northwest are concerned that a critically low inventory of type O negative blood and platelets will leave them hard-pressed to respond to the next national emergency, let alone meet needs of the nearly 100 local hospitals that count on Bloodworks for even common procedures like surgeries.

Missing Millennials: Finding the next generation of blood donors
New Release – Feb. 14, 2018
According to AABB, millennials account for only about 20% of collections. Nearly 60% of all blood donations come from people over 40, and people over 50 years old make up a disproportionate share of regular donors. Bloodworks is ‘going to where millennials are’ as the way to engage this missing generation of donors.

Train derailment results in urgent plea for donors
New Release – Dec. 18, 2017
Bloodworks Northwest issued an urgent appeal for donors today following the derailment of an Amtrak passenger train between Tacoma and Olympia that is making major demands on the community blood supply. Bloodworks has issued more than 150 units of blood to respond to emergency orders from hospitals receiving people injured in the tragedy.

Thanksgiving: a perfect time share the gift of life
News Release – Nov. 17, 2017
Bloodworks Northwest has issued a special appeal asking people to schedule a blood donation during the next 10 days. Starting on November 20 and extending until New Year’s 2018, Bloodworks is increasing hours at its donor centers to encourage donations.

Bloodworks responding to Las Vegas Shooting
News Release – Oct. 2, 2017
Bloodworks Northwest has issued an urgent appeal for donors to help build local inventories in order to be ready to respond when shipments are needed to help victims of Las Vegas shooting.

Type O supply drops 37% in 10 days
News Release – July 11, 2017
Bloodworks Northwest issued an urgent appeal for donors after the community supply for Type O blood — the most common blood type among people in the Northwest — plunged by 37% since the beginning of July.

All too familiar with hospitals, local Boy Scout organizes blood drive
KOMO – July 5, 2017
When asked what the badges on his Boy Scout uniform represent, Seth Baker starts naming them off.

‘Walking Blood Bank’ Could Save Lives in Remote Areas
Voice of America – June 21, 2017
A blood network in the Pacific Northwest has developed a kit for transfusions in remote places that it says “takes the banking out of blood banking.” 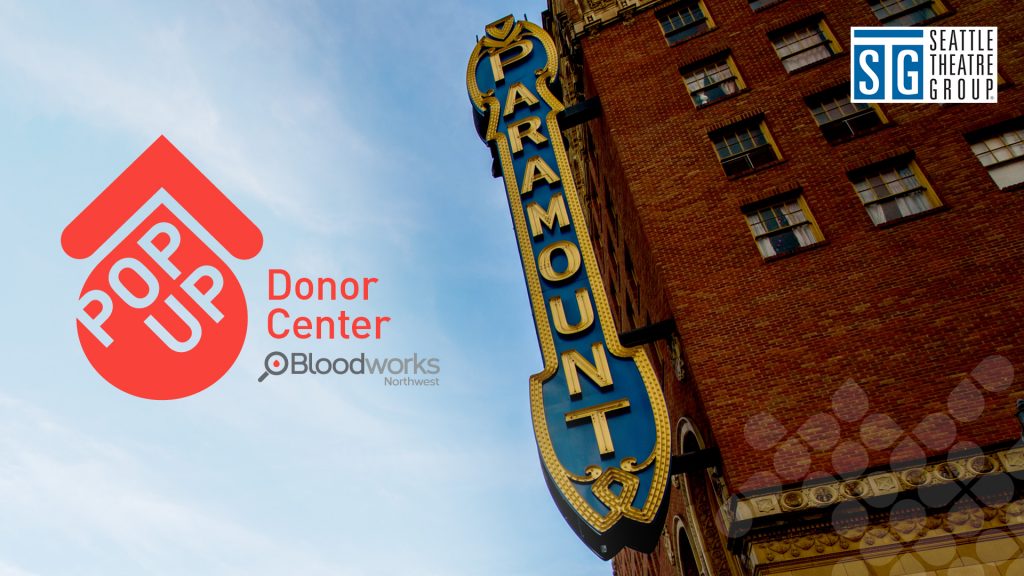 Arts Community Pop-Up Donor Centers
Multiple locations and dates
In partnership with Bloodworks Northwest, the arts community extends an invite to their next act, an exhibition of human kindness and care. STG’s Paramount Theatre, the National Nordic Museum, Bellevue Arts Museum, and Seattle Rep have all answered the call and will transform into instant Pop-Up Donor Center experiences in an effort to support the blood supply and ensure a seamless restart to these procedures. Learn more.